10 foot interfaces · TELEVISION INTERFACE DESIGN
This project was done with Gaurika Singhal, under the mentorship of Zachi Diner, as part of Television Lab, HIT Israel.
The project brief
The outcome
The brief for this project was to identify a need in the space of television, and hence create a product or application for a smart TV. Through this project, we were to also understand the nuances of designing for 10 foot interfaces.
The outcome of this project was Stitch, a smart TV dashboard that 'tailors' content according to the viewers interests and viewing patterns. It also allows the viewer to collect moments and visualise patterns and thematics based on what they've watched.
2015 · 8 weeks · HOLON INSTITUTE OF TECHNOLOGY 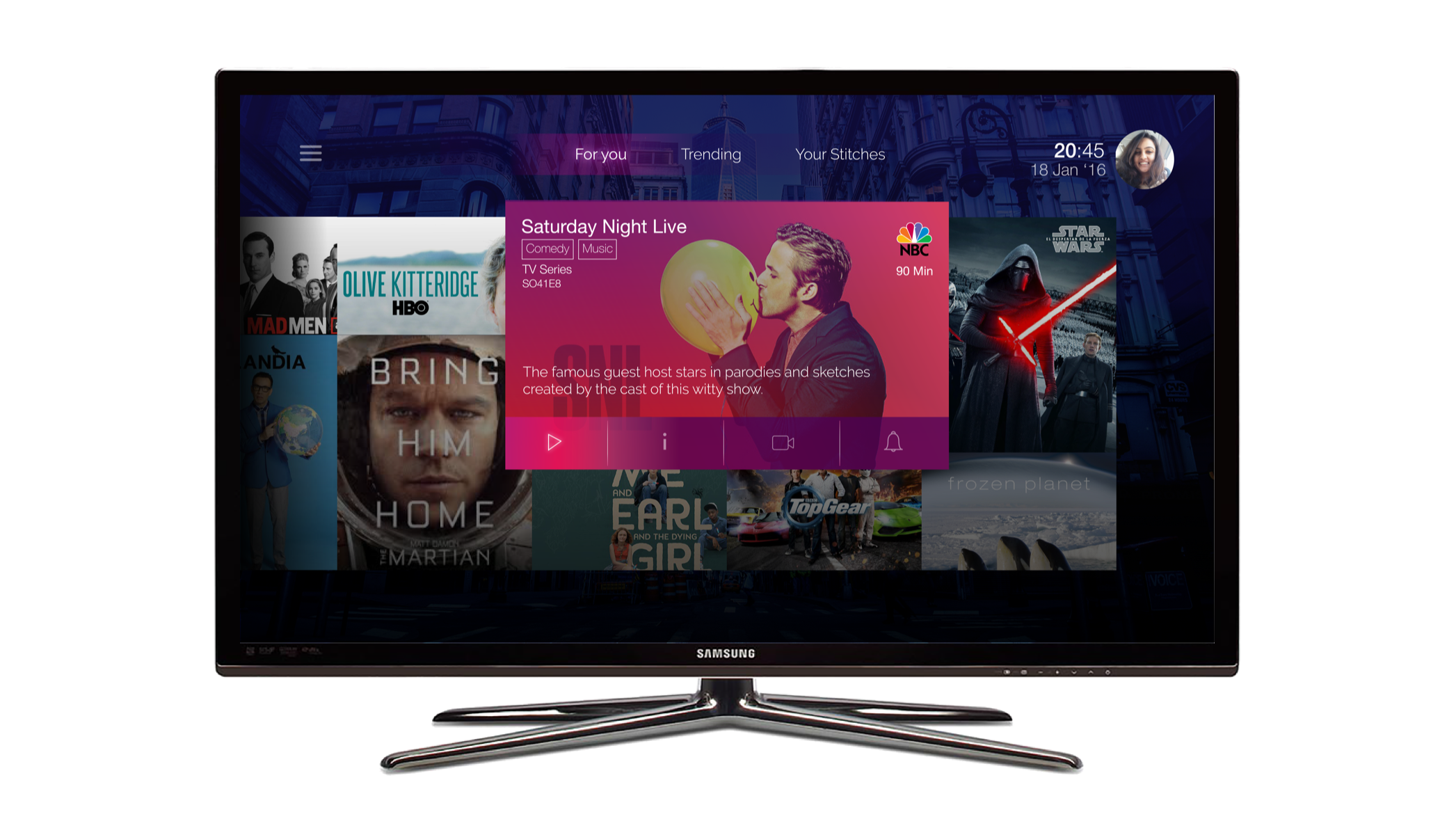 User research & survey
Designing experiences for television required us to understand what value television brings into its viewer's lives.
· What differentiates TVs from content consumption on the internet on any other device?
· What unique experiences come with television?
· What do people love about viewing content on the TV and what do they not like?
We spoke to 10 people to understand television usage in the current day and age, and why TV is still special.
The results of the survey were compiled in form of an inforgraphic, shown below. 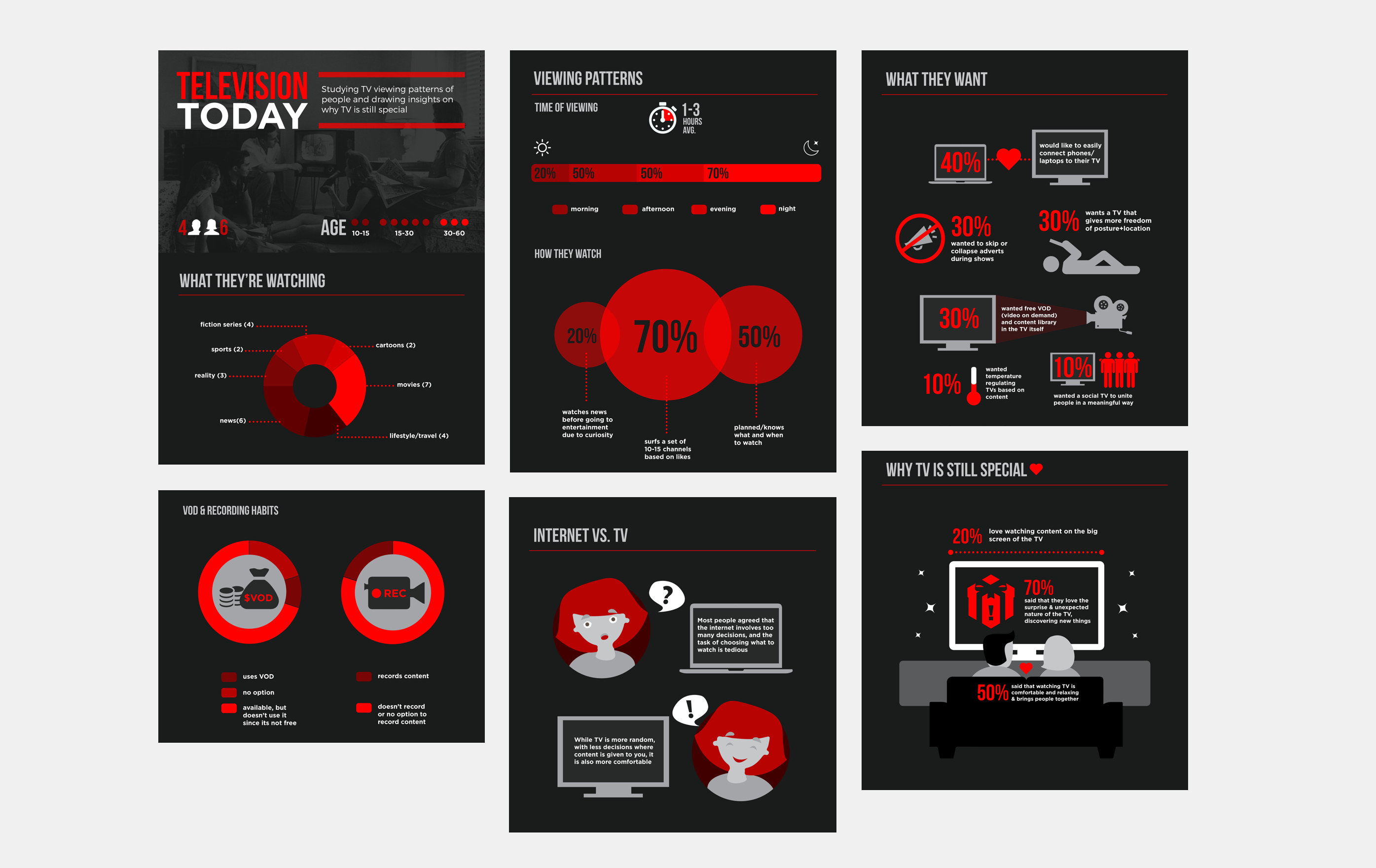 Key insights
The internet is vast, and deciding can be tedious.
Television can be unexpected, and comes with an element of surprise.
Television brings people together.
Most people agreed that while the number of options on the internet is more, it often involves too many decisions. The task of choosing what to watch is tedious and
never-ending.
Television comes with an element of surprise. Viewers often discover something new, and as a result end up watching something they would have otherwise not 'chosen'.
Television viewing is largely a social activity, watched often with family or a group of friends. The big screen is also an added bonus, and people unwind and relax while watching.
The concept - Stitch, television tailored to you.
Stitch is an entity who helps you get a truly personalised viewing experience, collect your most memorable TV moments and shows you your viewing habits.
Stitch is a smart TV interface that picks up on your interests and gives you relevant and new content. It's always present as a handy, helpful assistant that lets you save your most memorable TV moments, understand your viewing habits, and keeps you up to date with your social circle. 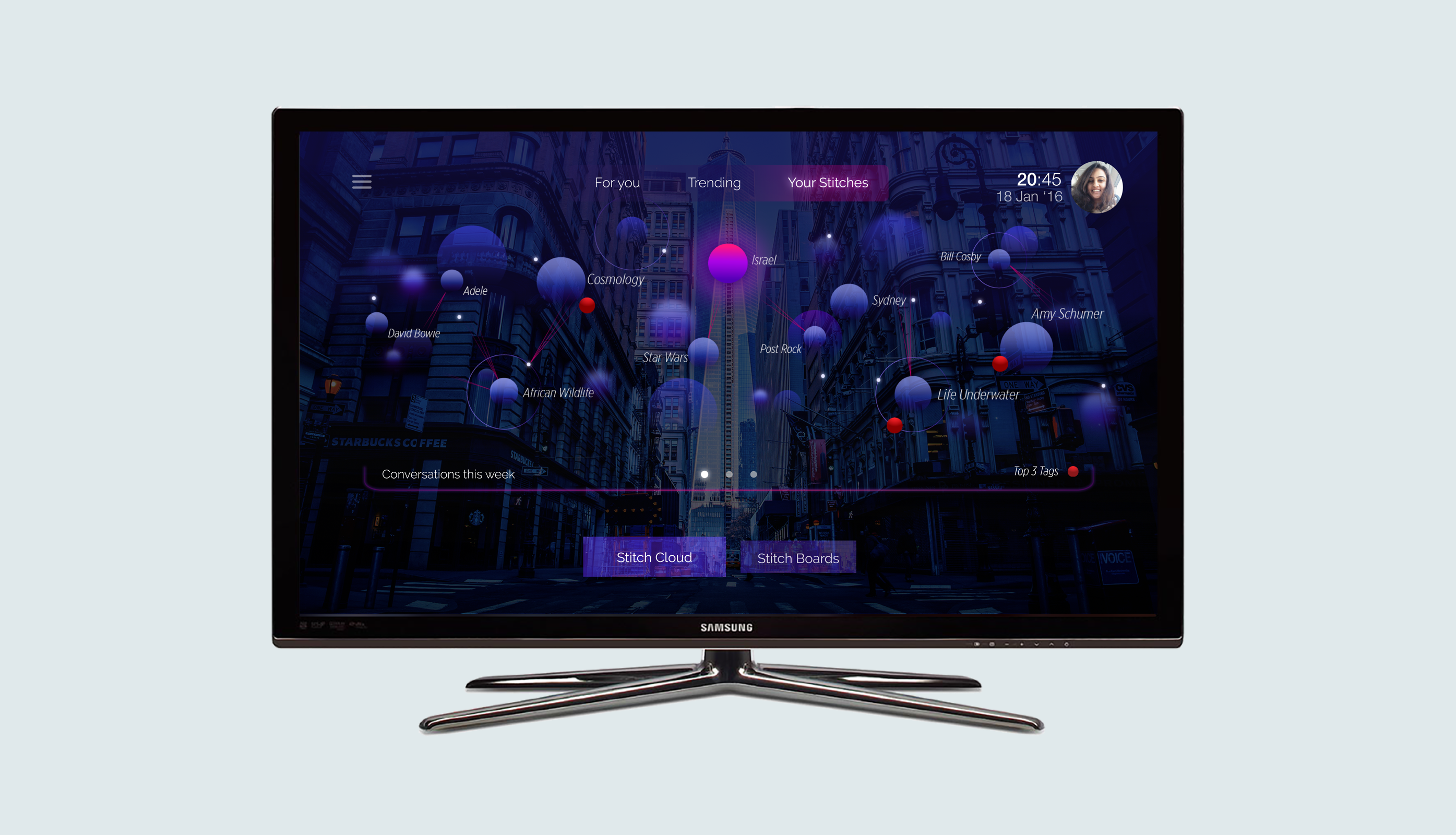 Concept development #1
Personalisation & thematics
The user gets access to a dashboard that visualises his/her viewing patterns over time and call out the themes that stand out most. The user can dig deep into each theme and explore new content or go back to old content to watch again.
TV viewing can be a personal or a social activity that can be enjoyed alone or together. Personalisation and thematics provide an interesting pivot for viewers to navigate to content, visualise themes, understand viewing patterns and get useful insights. This experience  gets better with time and use. 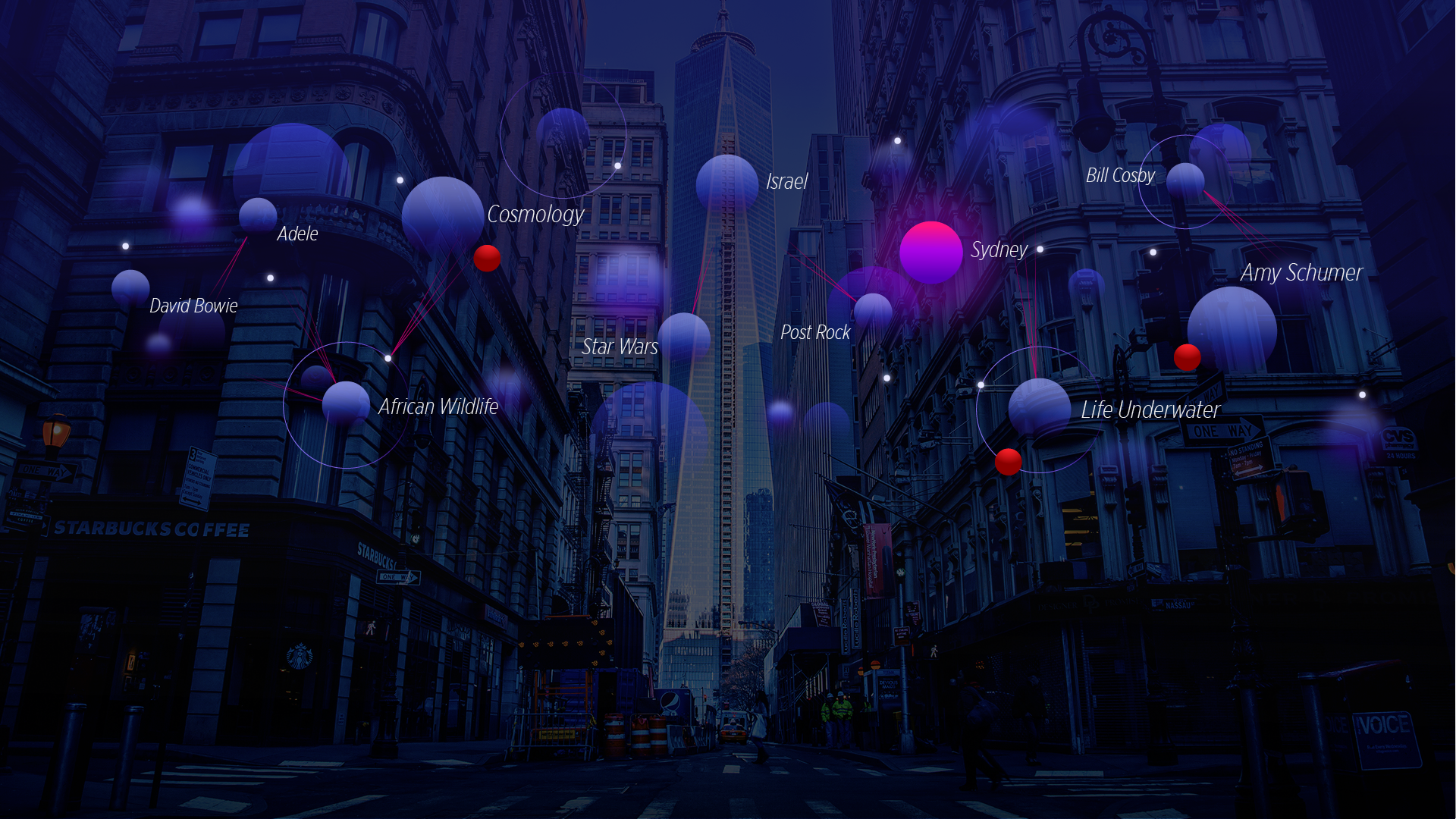 layered data gathering
_
How are the different ways Stitch will get to know the viewer to deliver a truly personalised experience?
Stitch is intended to be your friend at home, that can talk to you and understands you through these conversations, and your interactions with it.
Stitch personalises the TV viewing experience for the viewer by learning about their interests and habits. It does so through a number of ways shown below.

CONCEPT DEVELOPMENT #2
A personality for Stitch.
A friendly tone of voice
"Hey! Welcome home."
The personality of 'Stitch' was crafted to be friendly, helpful and approachable without being intrusive and overbearing.
"Start stitching."
"Stitch this to my comedy board."
"Oops, there's a knot!"
Traits of stitch
Stitch is a friendly assistant, and is there to help.
Stitch's purpose is to understand you better.
It stitches content you'll love on television.
Most people agreed that while the number of options on the internet is more, it often involves too many decisions. The task of choosing what to watch is tedious and never-ending.
Television comes with an element of surprise. Viewers often discover something new, and as a result end up watching something they would have otherwise not 'chosen'.
Television viewing is largely a social activity, watched often with family or a group of friends. The big screen is also an added bonus, and people unwind and relax while watching.
'For you'
User Journey
As the concept of Stitch started to shape, we mapped out a flowchart of the user navigating through the different stages you using and interacting with Stitch.
‍
In this dashboard, Stitch puts forth content that the viewer will love to watch, with visual emphasis on the most relevant content.
'Your stitches'
Your stitches has two views - stitch cloud and stitch board. While the cloud is a thematic visualisation of viewing history, the board is a place to find saved moments.
'Trending'
The trending dashboard keeps you up to date with what your friends and family are watching, and what's trending in your social circles.

Wire-framing
Commonly in user-interface design, before crafting high-fidelity details its important to chart out the core workflows via low-fidelity wireframes.
At this stage its important to be unbiased by visual design decisions, and focus on how the user of the product is likely to react, behave and navigate through the experience.

Visual design decisions.
What are the nuances of designing for '10 foot user interfaces'?
Why 10 feet?
Compared to desktop computer and smartphone user interfaces, GUI for televisions uses text and other interface elements which are much larger to accommodate a typical television viewing distance of 10 feet.
INteraction patterns
Additionally, the limitations of a television's remote control necessitate extra user experience considerations to minimise user effort.
The dashboard design & layout to minimise user effort.
Due to the dimensions of a television screen, where the horizontal breadth is more than vertical length, a horizontally scrolling grid optimises on the available real estate.
To emphasize on some content more than some others, the grid is non-uniform with three sizes of images bringing in a visual hierarchy in the grid.

Use of image and colour to make content stand out.
Since the content was to be viewed from an average distance of 10 feet, it was imperative to make visual design decisions that allowed for the content to shine.
For this reason, we used big, bold visual tiles for each piece of content with overlays that were bright and noticeable from a distance.

Final screens for Stitch
Below is a collection of a few key screens from Stitch including the 'For you' dashboard, the stitch cloud, saving a 'stitch' and the trending dashboard.
Key workflows
Over time, Stitch gets better at understanding you through conversations and interactions.
Examples of the new information architecture, important user journeys and how things work in the proposed website.
Stitch gathers and 'stitches' your dashboard putting together relevant content that would interest you the most.
The 'For You' dashboard 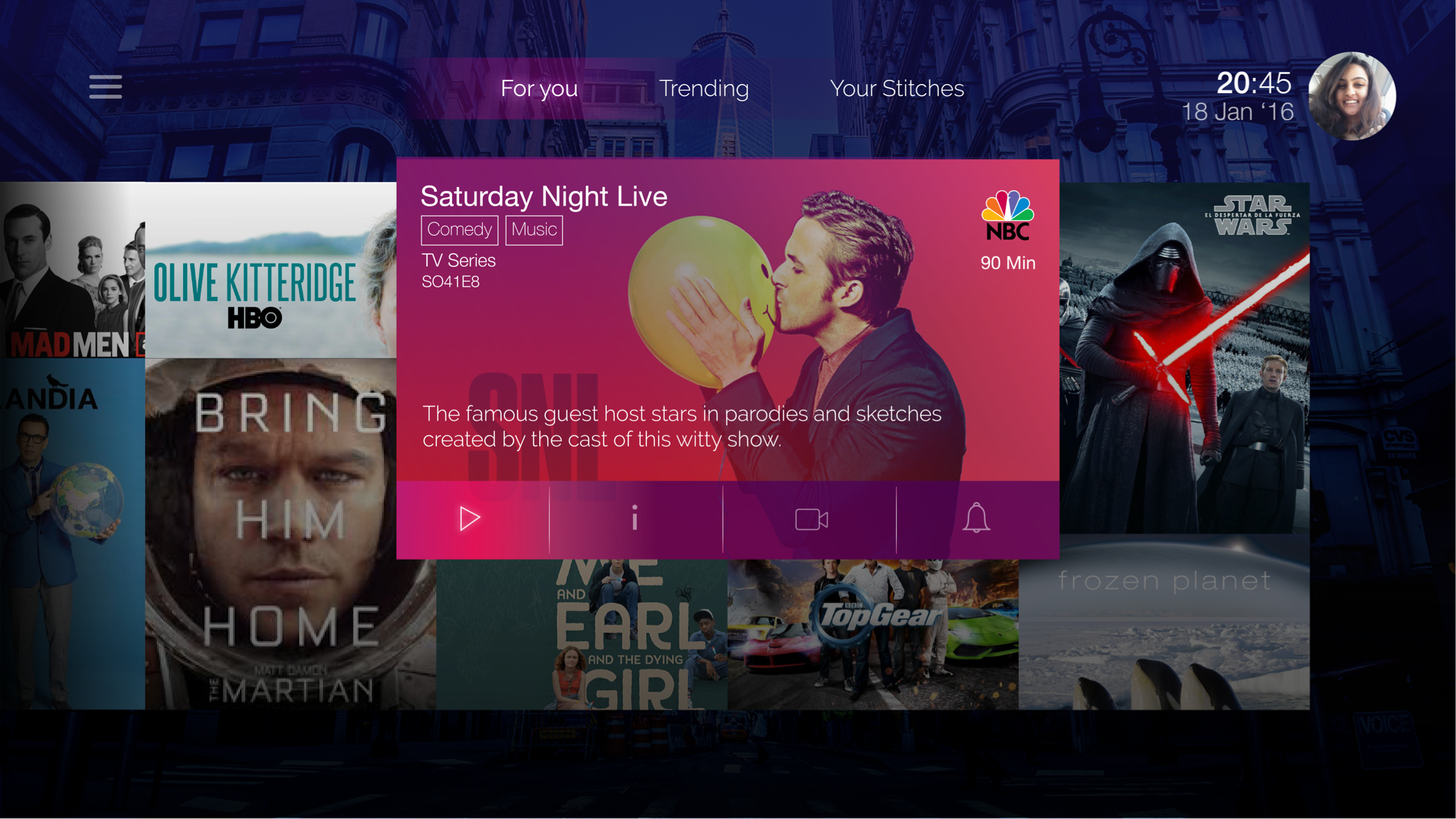 Your stitches: the cloud
Your stitches: the boards
Stitch boards is list/grid based manifestation of saved or 'stitched content'. This view shows your saved stitches with clear thumbnails, that you can go back to and watch any time.
Stitch uses uses micro-tagging to pick up on keywords from your interactions and conversations with it as well as your viewing history. Your stitch cloud is a visual manifestation of trends of what you've been watching.

Conversations with Stitch
'Stitch to my board'
You can 'stitch' content or 'moments' as and when you're watching television which get saved in your stitch boards. These boards can be categorised and named as per the type of content of interests such as comedy, food or nature.
The voice command feature allows you to ask questions to Stitch and 'stitch' content clips or 'moments' to you stitch boards. You can go back and re-watch your stitched content at any time.