A guide to
Keoladeo National Park

Graphic design · Illustration · print design
The proposal
The self-defined brief of this project was - How can we employ visual communication to create avifauna awareness?

After a week of scoping, the chosen direction was - promoting avifauna awareness, and a general love for birdwatching and birds through a brand revival of Keoladeo National Park, which is one of the most significant bird sanctuaries in India.
To design a national park guide and an overall brand upheaval for Keoladeo National Park.

The ulterior intent was to re-instil a love for birdwatching amongst laymen visiting the park, while also providing useful information to experts, experienced ornithologists and researchers.
2017 · 6 weeks · National institute of design
The project brief 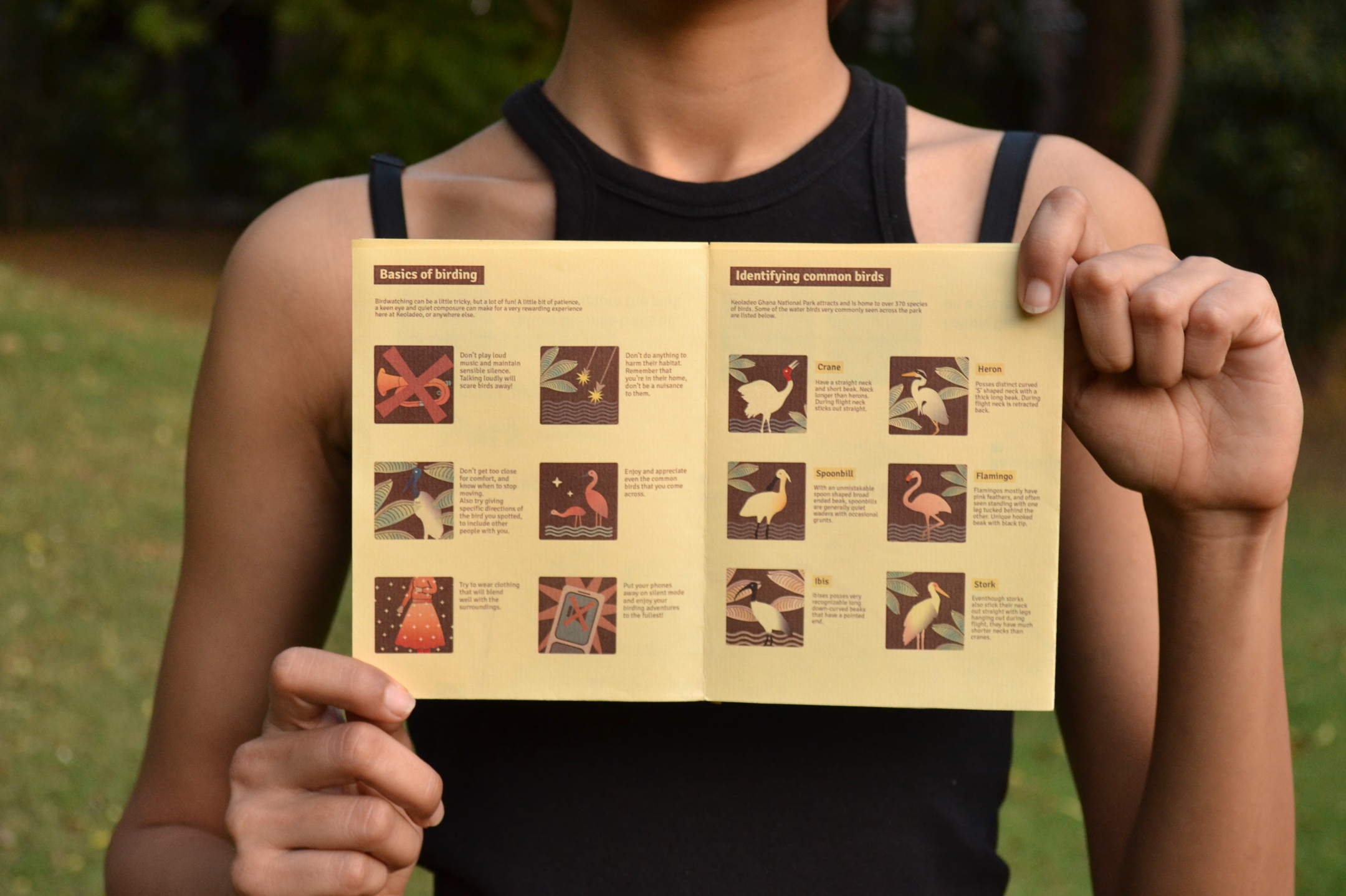 Keoladeo National park is a bird sanctuary in Bharatpur, Rajasthan.
· It has over 370 species resident and migratory birds, hence of immense value to ornithologists and zoologists.
· It's the only man-made wetland sanctuary established by Maharaja Suraj Mal, making it historically significant.
· It's a UNESCO World Heritage Site.
Why does Keoladeo need an intervention?
Keoladeo's water crisis in 2004: Water from Ajan Bund was re-directed to feed farmlands surrounding the national park, to appease a certain group of farmers. The effect of this on Keoladeo has been catastrophic.
‍
· The birds numbers have plummeted.
· Water levels are critical.
· Several birds and animals died.
· Tourism collapsed.
What is Keoladeo and why is it significant?
To revive Keoladeo's repute and visitor flow, it needed a brand upheaval that celebrates the culture of Keoladeo and more importantly, bird-watching. 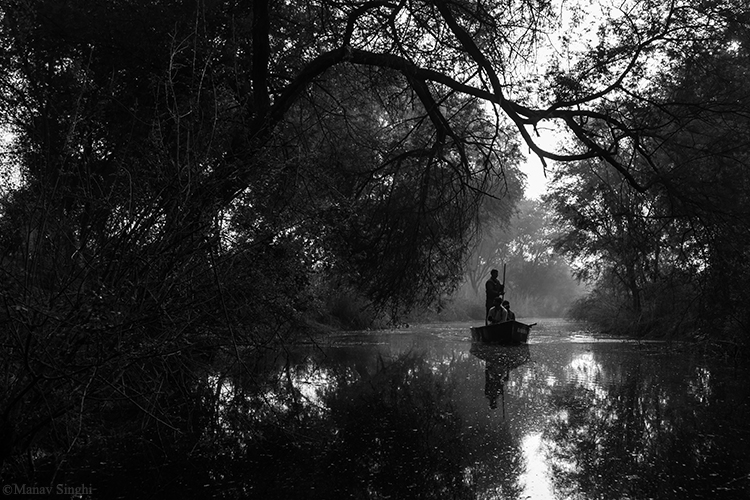 User research: The Keoladeo Interviews
To understand the target audience for the project better, I spoke to photographers, naturalists and even tour guides from Keoladeo.
"Keoladeo is not as tourist friendly. The lack of casual tourists make the experience enriching for people who have genuine intentions of coming to the park."
"Some things may not be relevant when you're already in the park, but brochures are taken back home and circulated amongst friends and family. It gains long-term value instead of having a short term function. Information dispersion is important."
Insight #1 - heerak nandy, naturalist
Insight #2 - malay dasgupta, photographer 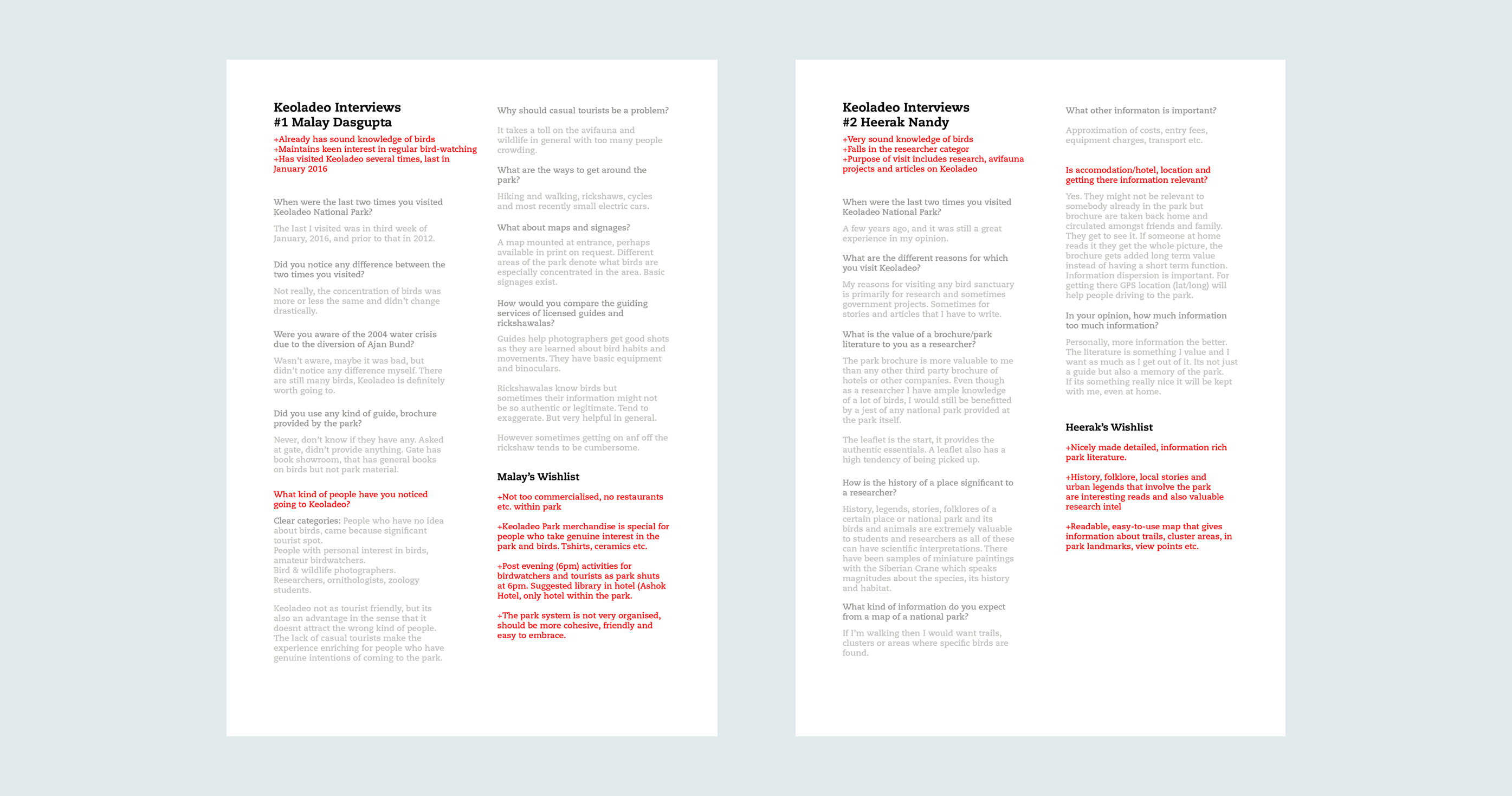 Who is the target audience?
The target audience was mapped back to four major categories ranging from casual tourists, amateur bird-watchers, professional or amateur wildlife photographers and experts.
Curating the content
content types
Mandatory information.

Important information but may not be relevant in in-park guide.

Value addition beyond the basics.

I spoke to several leads and park-guides who live and breathe the birds of Bharatpur to gather reliable sources, literature and content on Keoladeo. What followed was an intense curation and mapping of what would go on the guide, what was relevant and what points are nice-to-have.

Visual language
Cues from Rajasthan’s visual vocabulary and Keoladeo’s rustic style incorporated into modern, functional visuals.
To develop a visual language for the guide I took references from the Rajasthani folk art and the rustic style of Keoladeo's own visual channels. All this was combined with modernity to come up with a unique visual style.

Iconography inspired from Rajasthani folk art
The illustrations for the iconography were culturally rooted yet quirky and modern. Below are the icon sets for the different content modules. 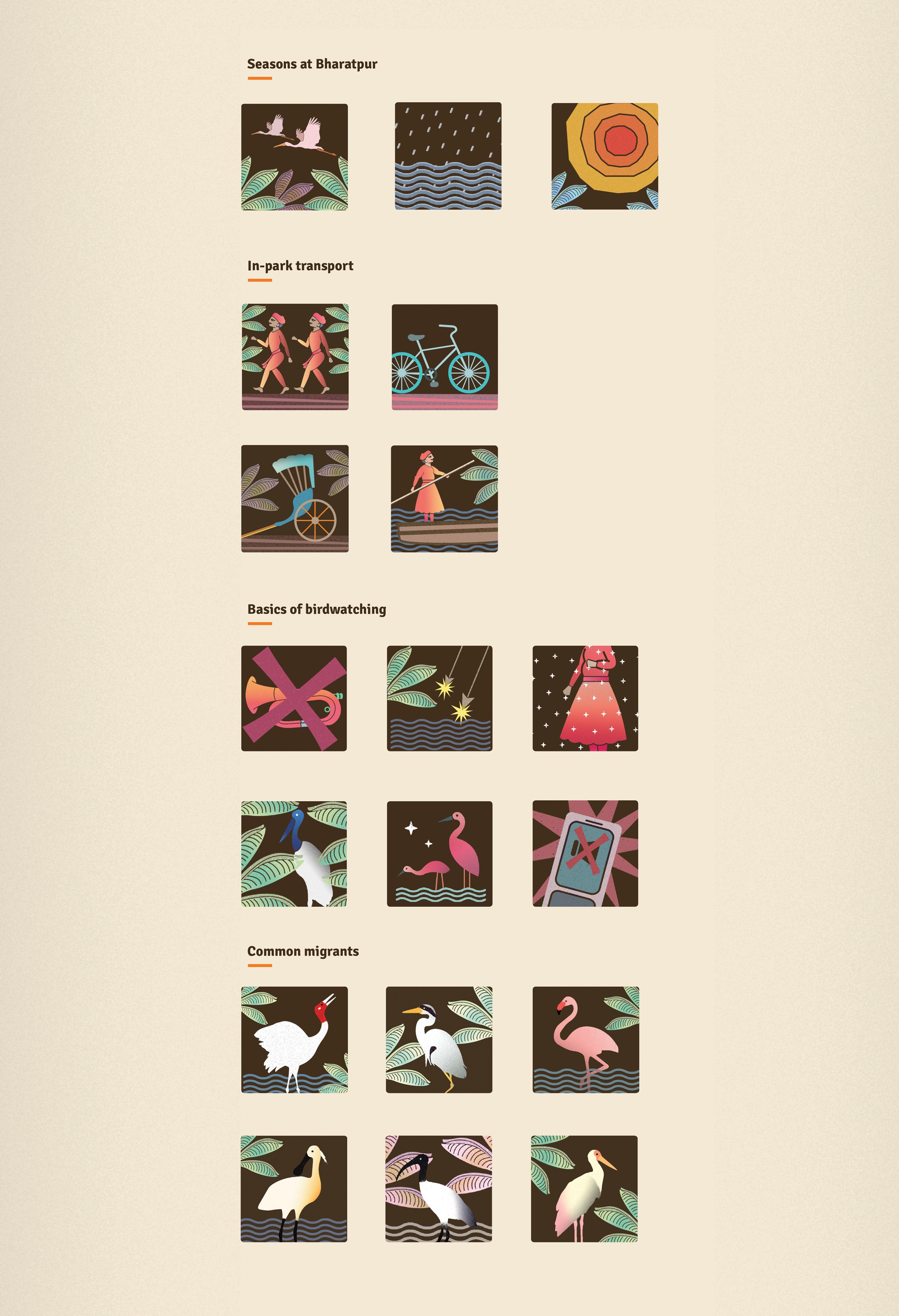 Quick and dirty paper prototyping
A variety of different paper prototypes were created to test out different sizes, different folding techniques and also map out the information architecture. 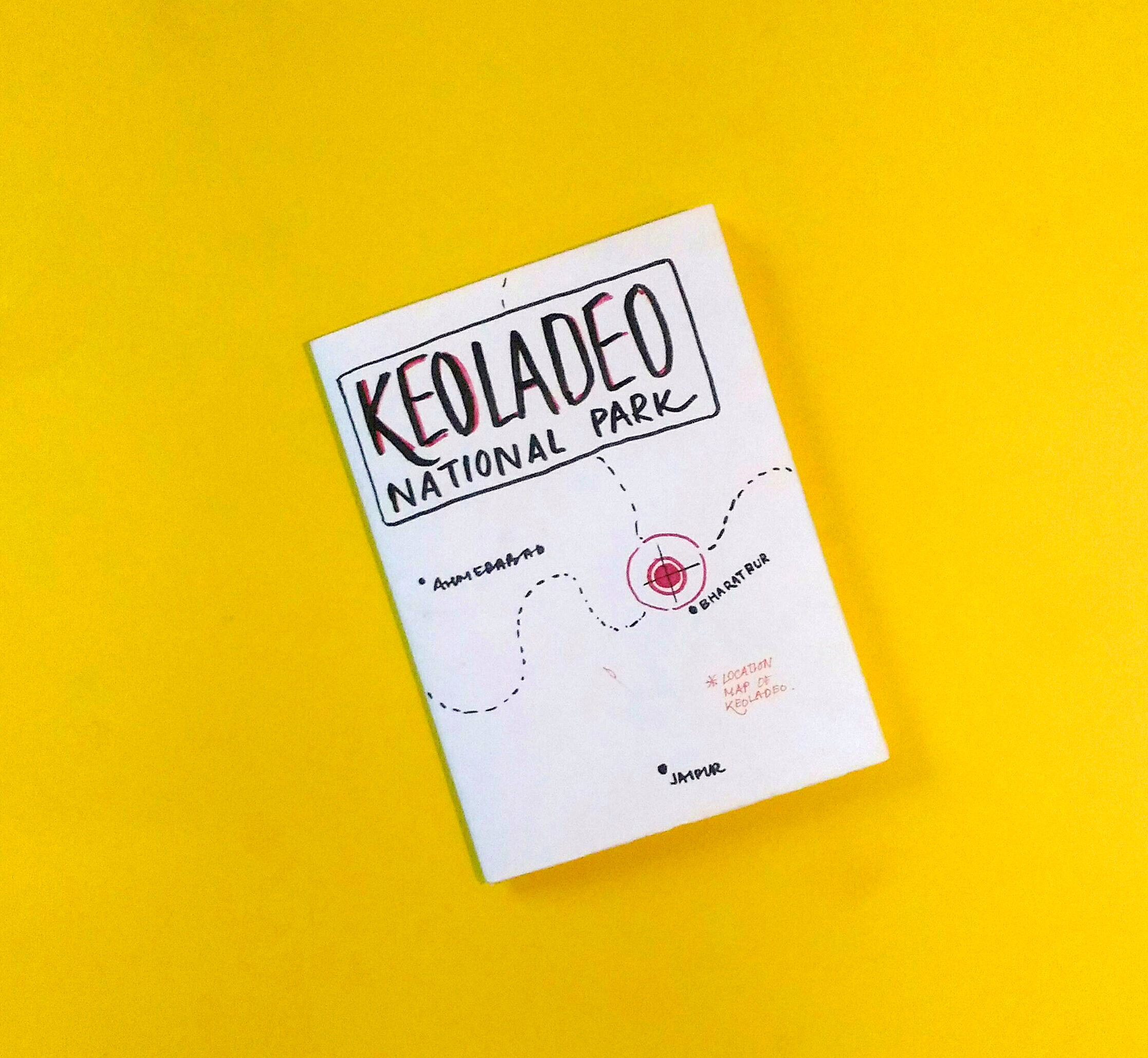 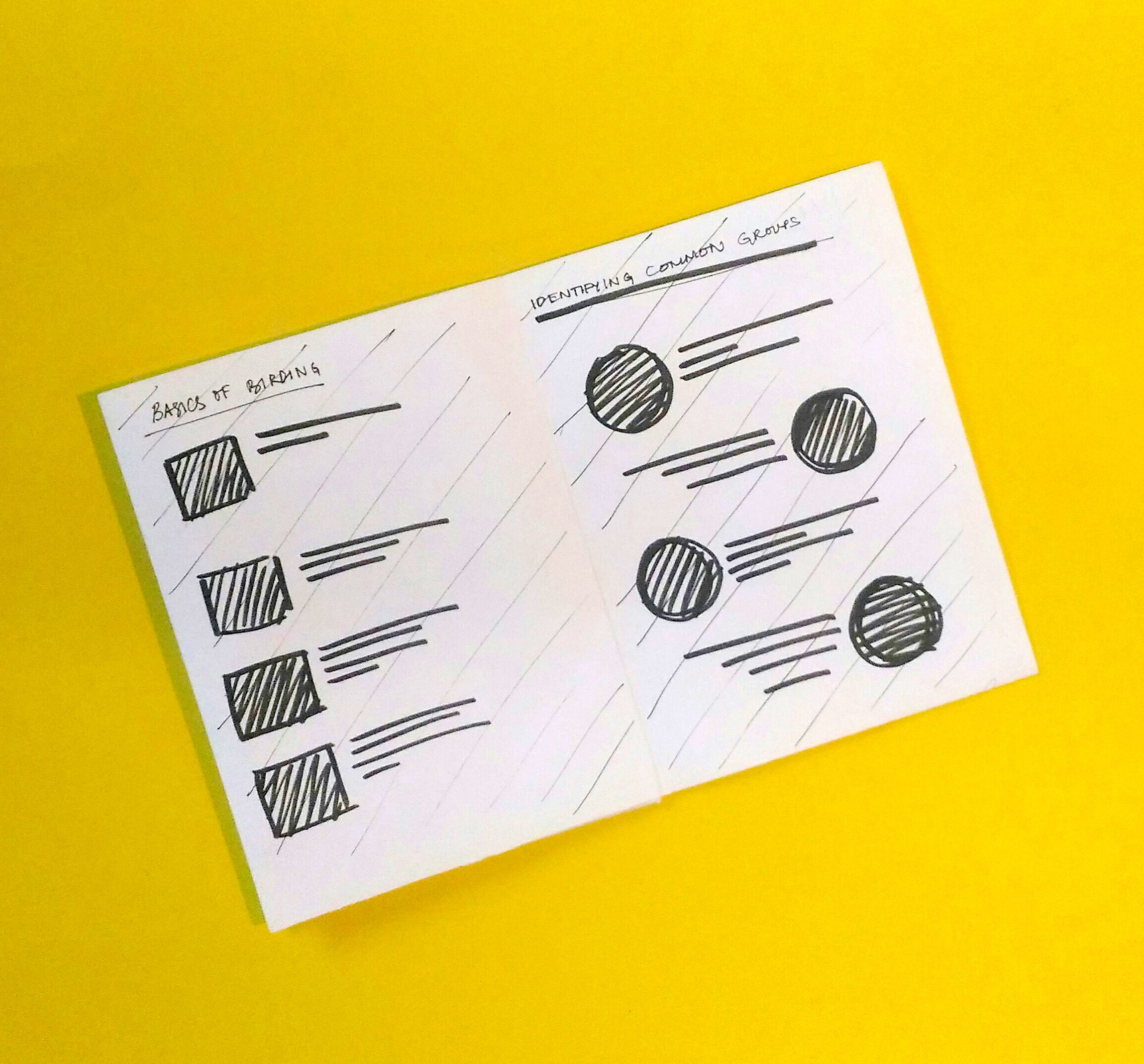 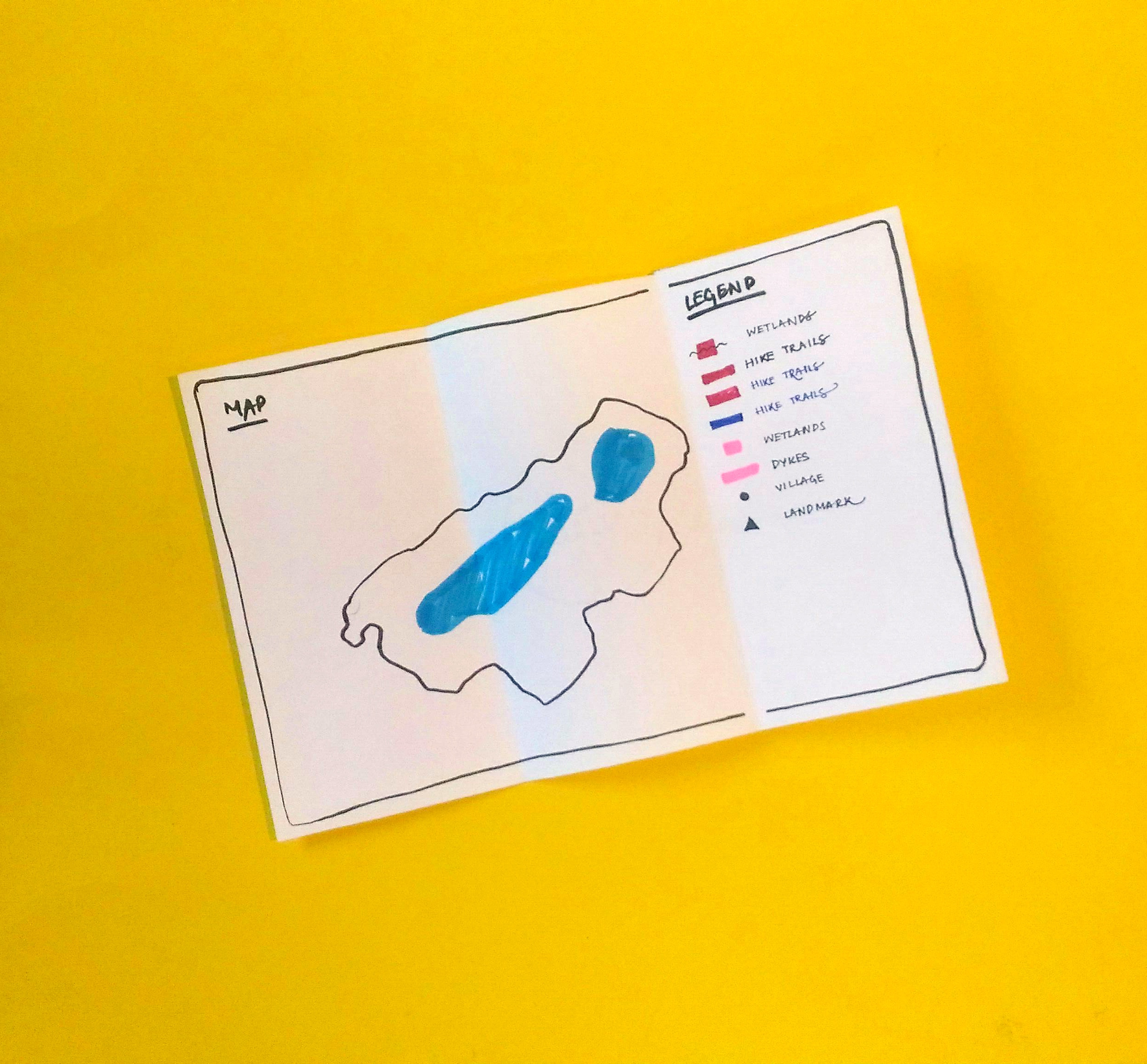 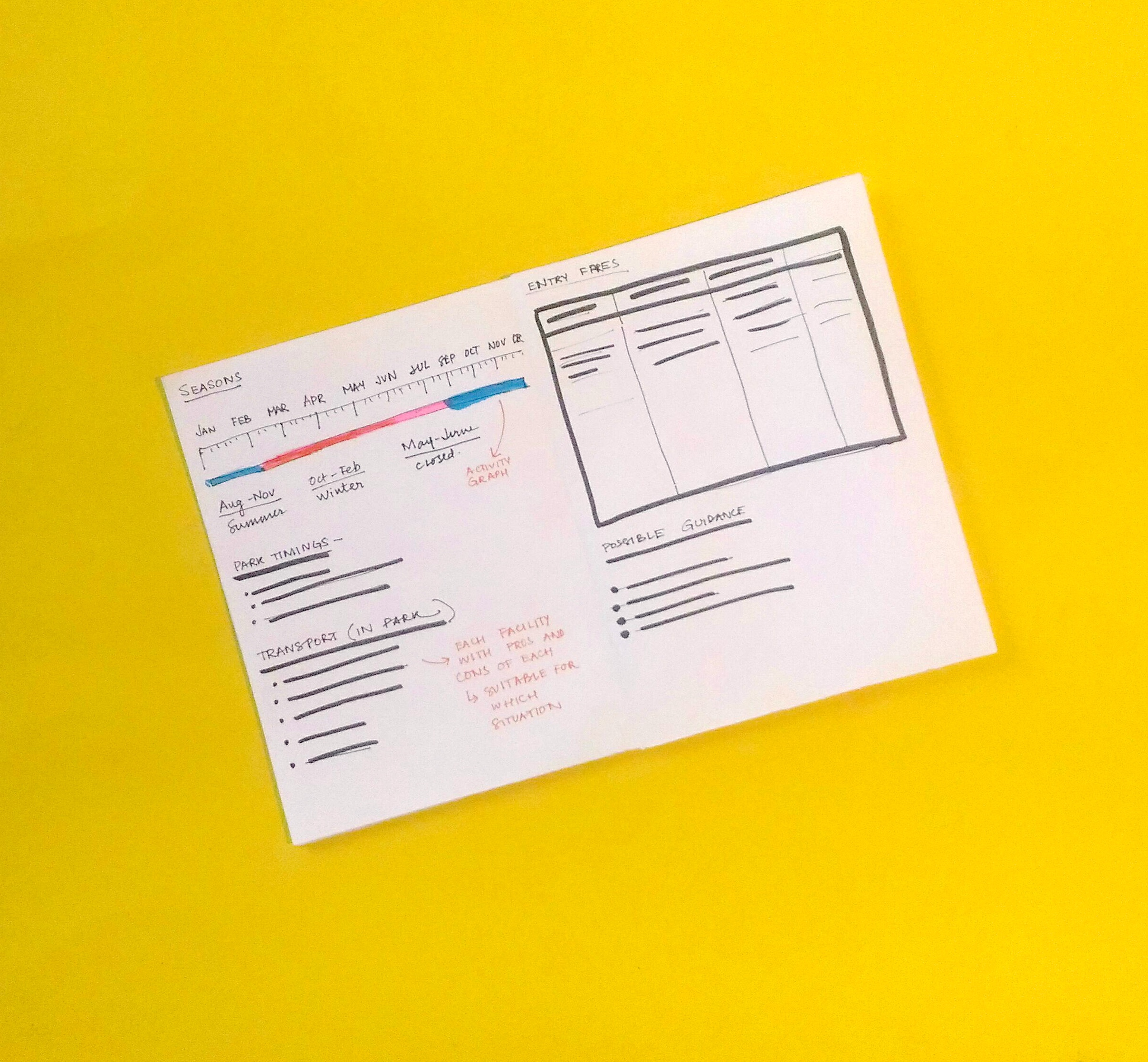 Printing and preparing the guide.
After the digital version of the guide was ready, it was time to start with the process of getting it printed. This involved choosing the right paper and printing process that would suit the design. 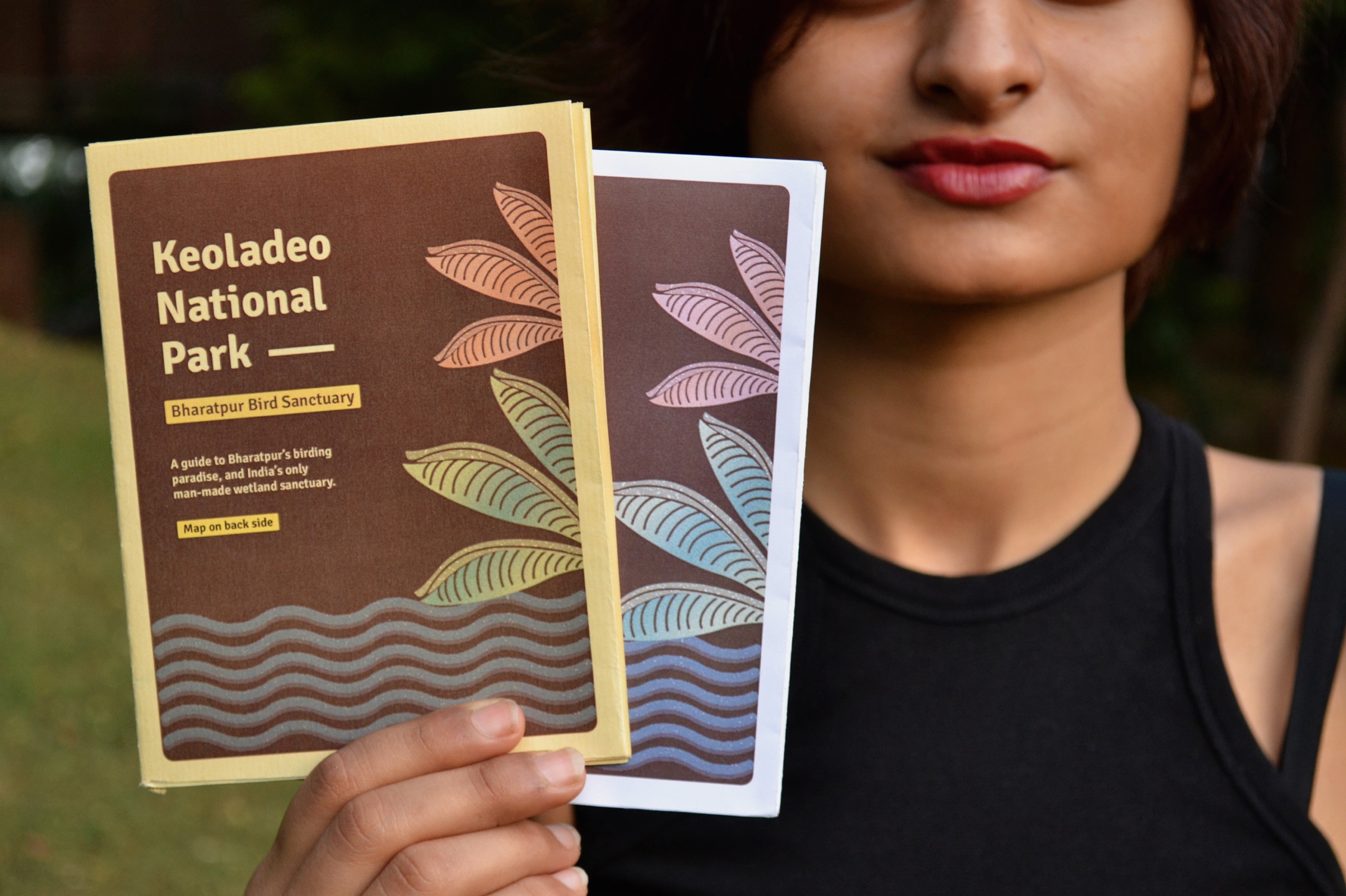 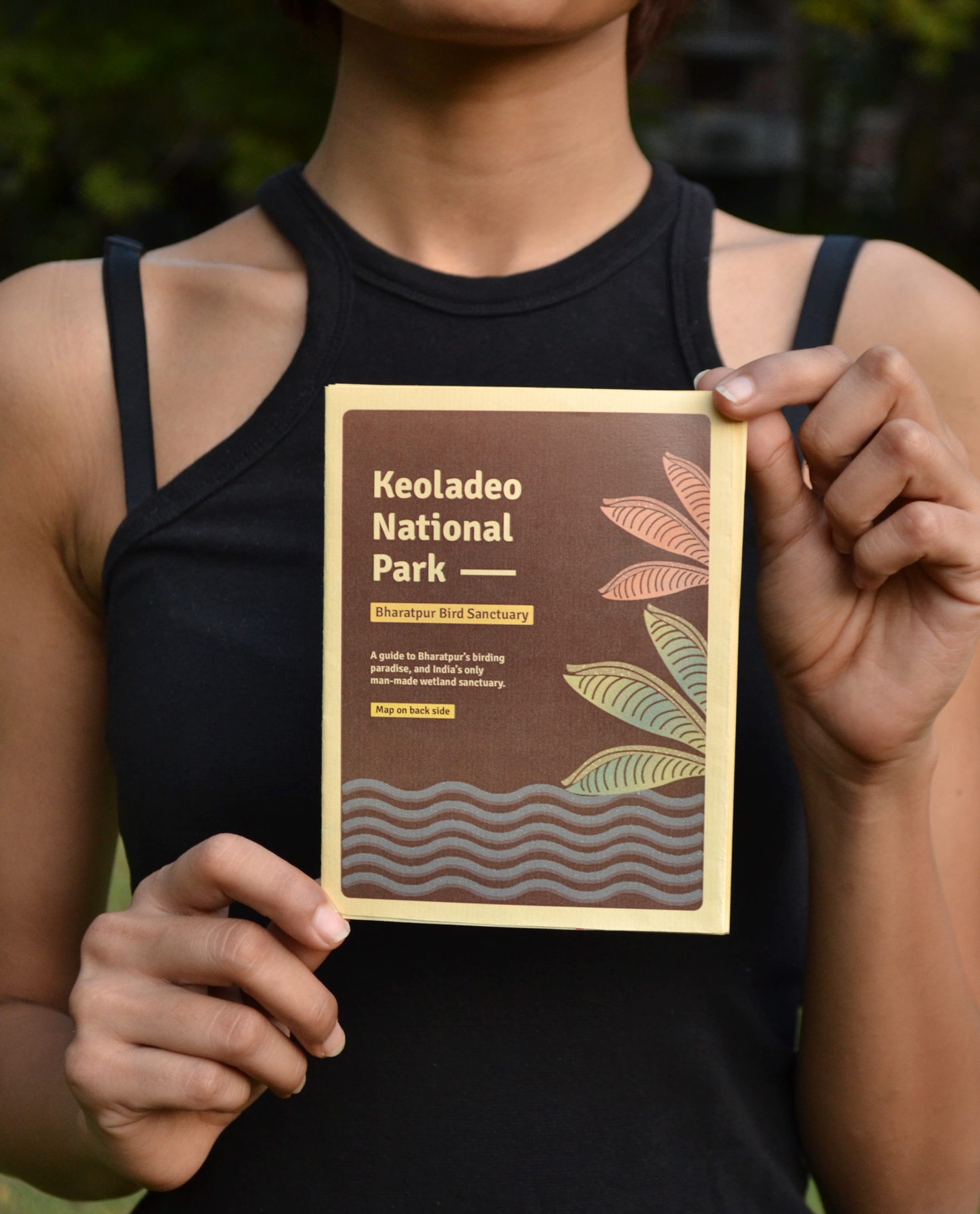 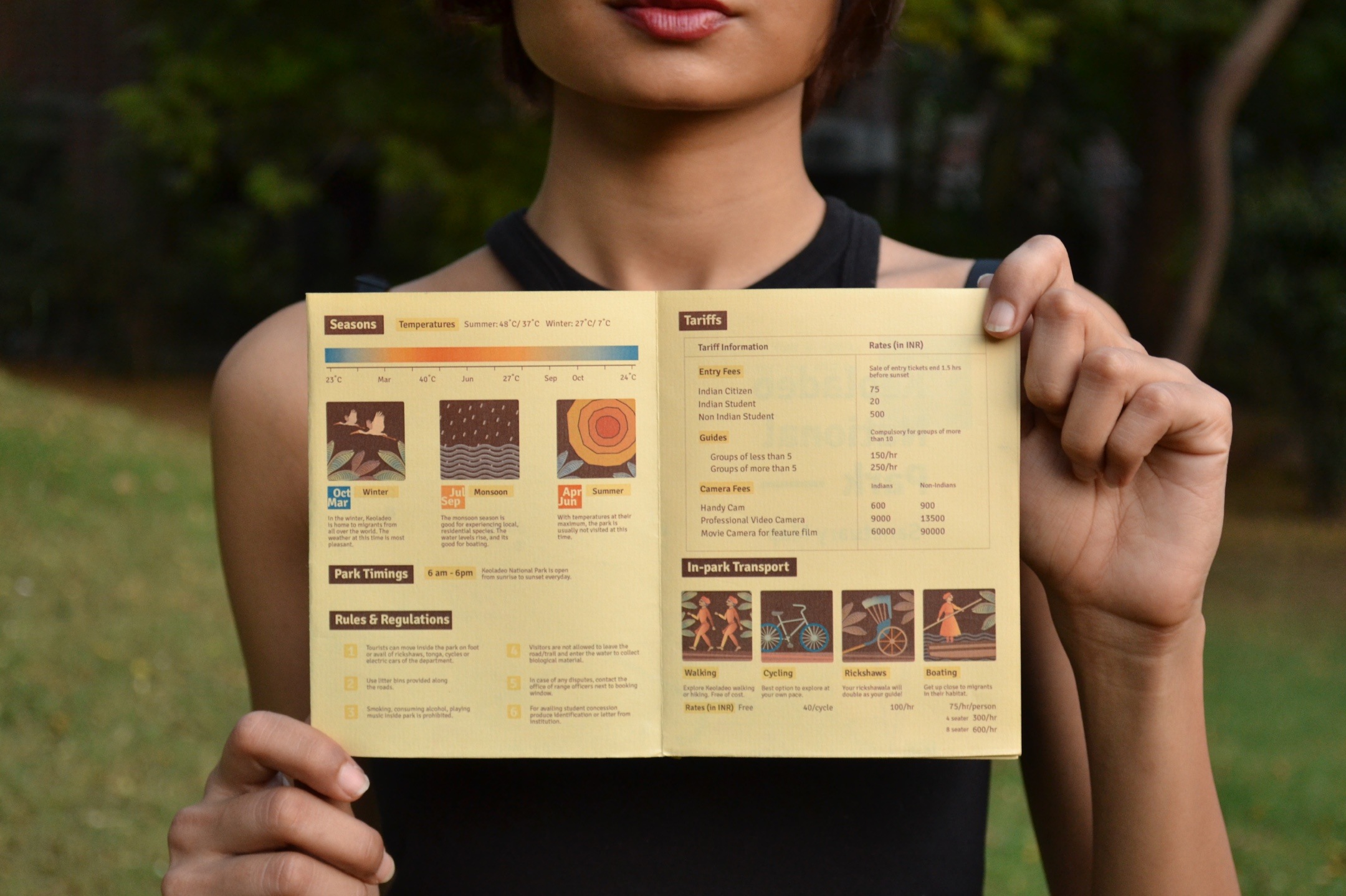 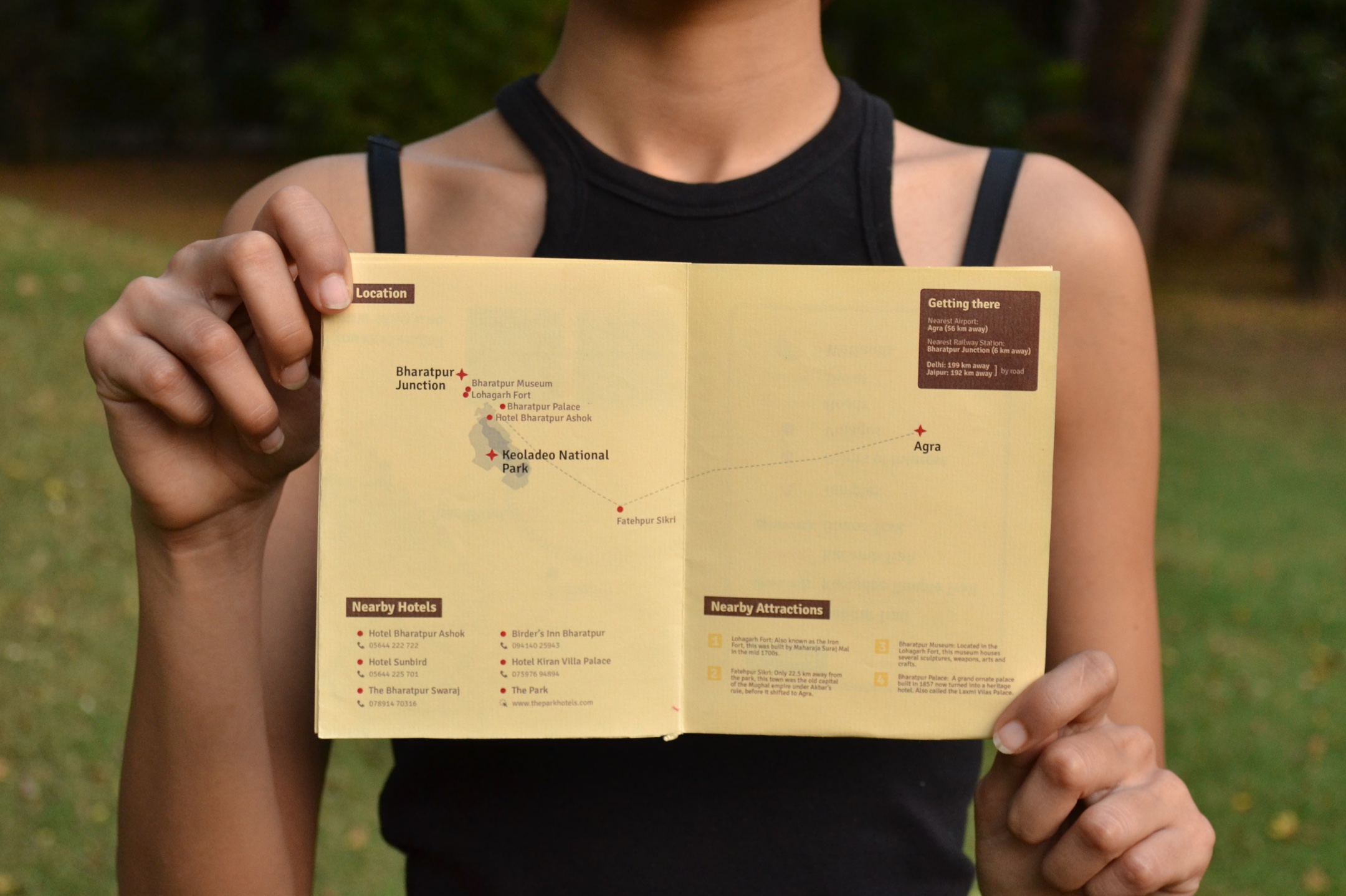 BACKSIDE OF THE GUIDE
The backside of the guide opened up into a full page map of the sanctuary that highlighted key trails, landmarks and navigation routes. 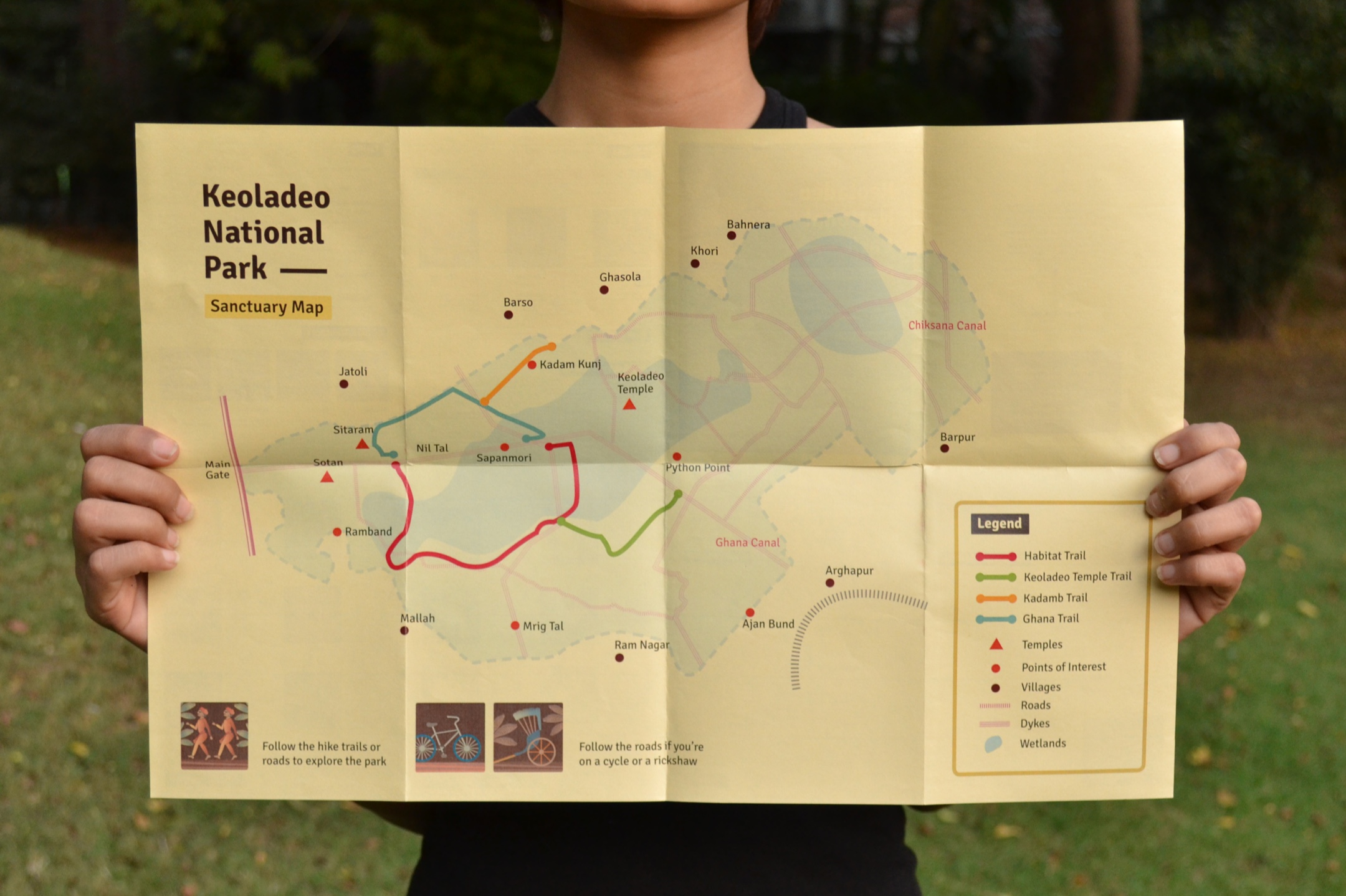 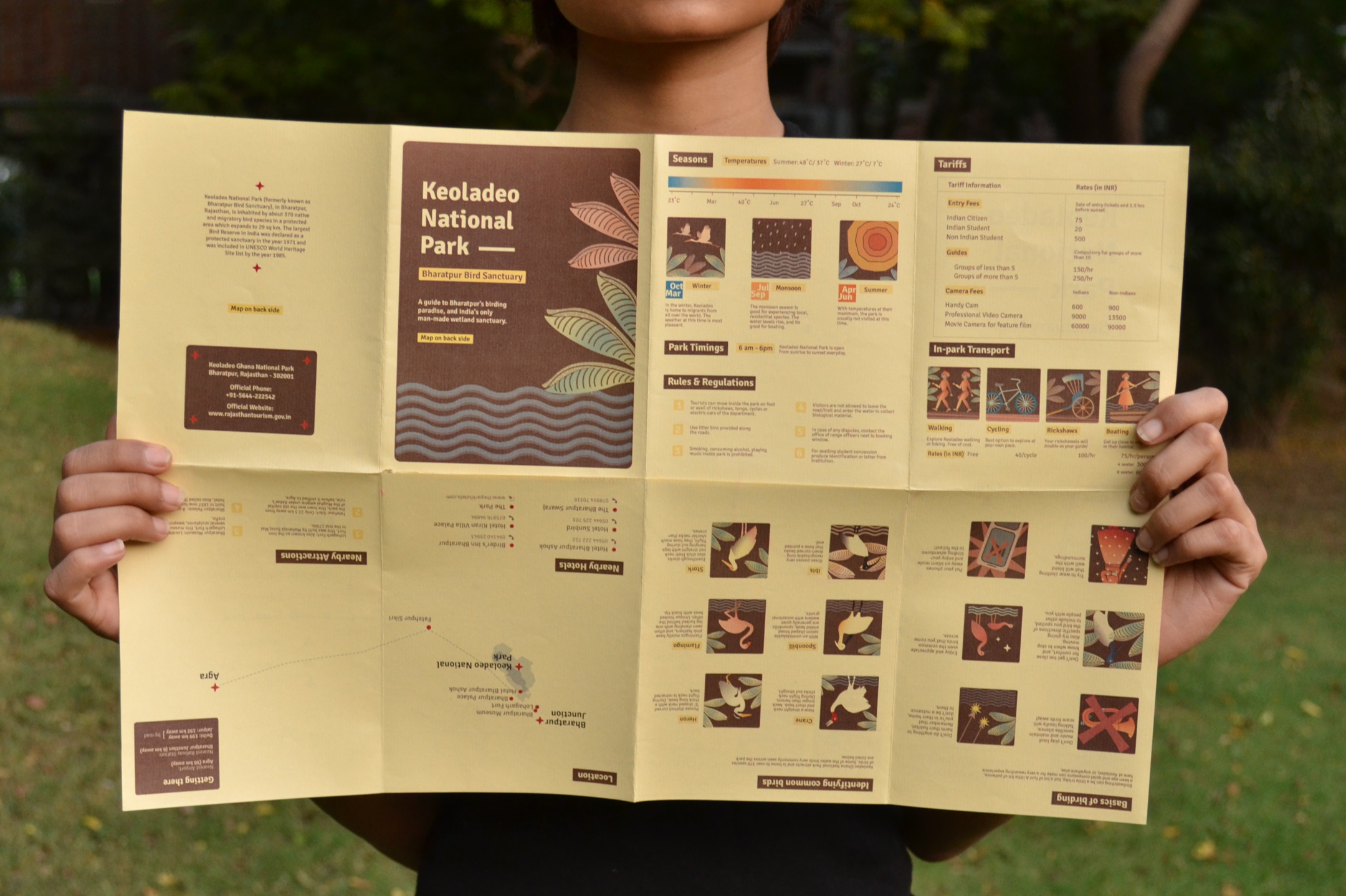